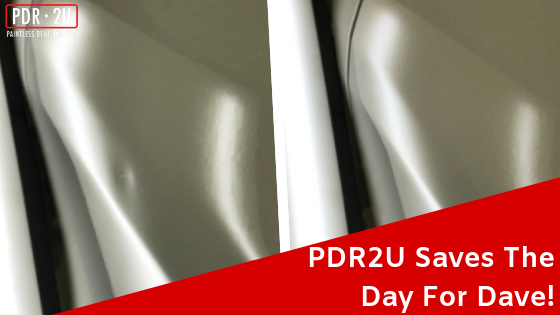 PDR 2U saves the day for Dave

It was mid-afternoon on a Sunday when the call came through from Dave, a business owner who had accidentally damaged his customer’s car. I could hear by the tone in his voice that he was stressed. He had called several other Paintless Dent Removal companies who were unavailable or simply not interested in helping him out on a Sunday. Reaching the point of despair, Dave called a friend interstate who immediately recommended PDR 2U. Problem solved!

While working on the roof of his customer’s car, Dave had accidentally pushed his elbows into the cant rails on both sides of the car, leaving huge dents behind. Somehow, he had managed to create 15 massive dents before he even realised his mistake. With his customer booked in to collect her car early the next morning, Dave had good reason to be stressed! He still had to complete his own work on the car and couldn’t do it until after the dents were removed. I could see Dave was in for a long night! There was no time to waste. Before the sun went down that day, the repair was complete and there was no evidence that Dave’s dents ever existed.

As a relatively new business owner, not only was Dave stressed out about his customer’s car, but he was also worried about the cost of the repair. On this day, Dave would have paid almost anything to have the car fixed, but customer satisfaction is a priority to us, and the fee was very reasonable. Dave could hardly believe the price, as he knew what it would have cost if he had to take the car to a panel shop. Not to mention the conversation he would have had to endure with the owner of the car if he had to say that the panel shop would have her car for several days!

Dave was one very happy customer!

To see what some of our other customers have said about their experience with PDR 2U, feel free to check out our 100+ 5-star reviews and recommendations at bit.ly/PDR2U_Brisbane