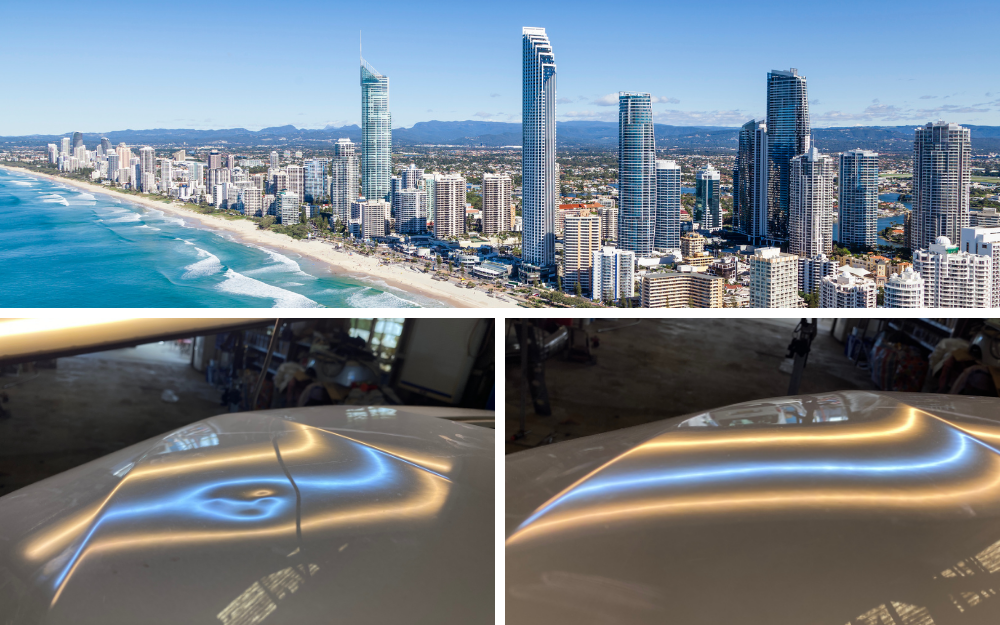 If you’ve ever traveled with your surf gear or had the kids in tow, you know how hard it is to return from a vacation with your car in the same condition as when you left. Surfboards are some of the bulkiest, most awkward gear to carry, so we don’t blame you if you’ve damaged your car.
That said, sometimes denting your car isn’t even your fault, but someone else’s! With so many people traveling through Brisbane and the Gold Coast beaches, especially during the holidays, it’s not surprising that you’d come home from your trip with a dent or two from other people’s gear moving a bit too close to yours.

For starters, it’s a good idea to back your car out of the garage before packing it, so as to avoid bonking the side and bumper of your vehicle as you move gear. If your kids are the type to help you pack, you very well might get an Esky dropped on your bumper. However, if they’re playing ball while you pack, a misplaced ball kick could leave a dent in any panel of your car. Lucky for you, ball dents are one of the most common dents that need to be removed, and they’re pretty easy to fix!

Denting your car on vacation is never part of the plan, but we vote you go on that trip and worry about the dents later. PDR2U does Gold Coast dent repairs and can even meet you in your hotel parking lot! Regardless of whether the damage was caused by moving awkward, pesky surfboards on and off the roof racks, the kids dropping gear or a neighbouring vehicle bumping you on their way out, PDR2U can fix your dents quickly and easily!

You could try to fix your dents the DIY way, but you’d best leave it to the professionals who know how to properly execute the art of bodywork. What’s more is that PDR2U is one of the top-rated Gold Coast dent repairs dent repair companies in Brisbane, “not just for fleet vehicles but for the everyday driver.”

Our specialty is in paintless dent repairs, so you can pick up your car knowing it’ll look good as new. Dent repairs that use paints or fillers cost more because your car has to go not only to the repair centre, but to the paint shop too! With PDR2U, there’s no more worrying about perfect paint matches or paying through the roof for that service.

Even better, when you call PDR2U with a dent concern, we will send a technician directly to you. They will inspect the damage done to your vehicle and provide you with an estimate of what it will cost to repair the dent(s). The value of your vehicle will also remain higher with paintless dent repair because it maintains the original paint job.

Some repairs will require us to refer you to another company, including damages that have scratched, chipped or stripped the paint off the body of your vehicle. That said, if we can fix it, we will – and you’ll have a lifetime warranty on any repairs you get done through PDR2U.

Stop worrying about dents devaluing your car – because we can fix it! Contact us today for Gold Coast Dent Repairs and get your car’s dents sorted as soon as possible for an affordable price.